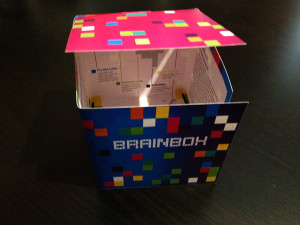 We are Kirsty Marsden, Huan Zhang and Tatjana Trogrlic, the design team of the DIT MA in Professional Design Practice 2016.

We were lucky enough to be given this great opportunity to design a creative and informative piece for Project 20/20, to hand to the audience of the MuseumNext event 2016.

During our meetings with Liz Coman, of Project 20/20, at The LAB, Dublin, we discussed various concepts that would represent both a fun and an informative delivery for our solution in order to promote Project 20/20, a project that centres around working with young children, by means of Visual Thinking Strategies, with contemporary art as its focus.

To produce a design strategy and physical piece that would be delivered in conjunction with a presentation about the project, at the MuseumNext event, April 2016.

We started with research in order to ascertain if there were similar projects of this nature in and around the Dublin area and, further a field, in order to evaluate how they present themselves visually. Furthermore, we discovered visual literacy appeared in various establishments all around the world, but the biggest discovery was the great benefits it provides to its participants.

After extensive discussions of this topic, the team started to develop several concepts and produced various design solutions, assessing which of them would prove most effective to communicate the message of Project 20/20.

We then developed three ideas, which were as follows:

Even though the project encompasses all three, we felt engagement was the strongest of the concepts, as without engagement, nothing can move forward. Visual literacy engages children and teachers alike, and is beneficial in terms of learning, communication, development of critical thinking and, creativity. Development is also suitable, since children can develop a varied range of skills through visual literacy that can prepare them for the future. Visual literacy also inspires us to think divergently and encourages us to consider different solutions for one problem.

We came to the realisation that, having the ability to think in many different and critical ways was truly a gift, and therefore, built up our concepts around this.

When we next met with Liz, we presented our three potential concepts, explaining each in turn. After much discussion, the idea of the â€˜gift of thoughtâ€™ was decidedly the strongest solution to develop, and the idea of a gift, that could be produced in an engaging and fun manner, that would represent the essence of Project 20/20, would indeed an exciting challenge to accept.

We had explained that some people in this world are not blessed with freedom to think for themselves and due to the nature of visual literacy and its benefits, as an alternative form of education, it aided such things as; self expression, development of individual thought processes, and, enablement of interpretation. Therefore, the gift of thought seemed like the most viable concept with a sincere message.

Throughout our presentations, we used an infographic of the brain to show which areas were stimulated by art and creativity. This gave us a perfect starting point, as we decided a representation of a brain, in some form, could be utilised to show thought, and for the gift, would be presented in some form of gift packaging. 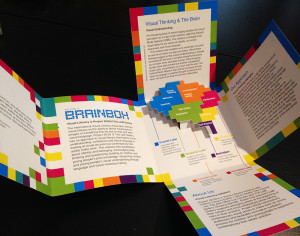 Gallery owner and designer, Oonagh Young, sat in on some of our design sessions as our industry specialist, to discuss our progress throughout the project. She mentioned one thing that stuck our mindsâ€¦

â€œnot all art is flat, donâ€™t be afraid of it. It can be whatever you want it to beâ€.

Bearing this in mind, we started to look at things from another perspective and took a different direction.

NOT ALL ART IS FLAT

We started to think a lot differently about everything as this was the point what seemed to shift things and open up new possibilities to us.

During our research, we had stumbled across a pop up book and even though we were quite drawn to the simplistic and childlike idea of its contents, we hadnâ€™t thought there was any way that a pop up element could be relevant to the promotion of Visual Literacy and our gift concept.

Instead we had still been thinking in the terms of flat and unusual visuals, to create a focal point for the MuseumNext event. We were thinking so hard on how to design something that was aesthetically interesting in a flat and traditional way, we hadnâ€™t thought of designing something where the shape and physical appearance was the interesting part.

A FRAMEWORK TO BUILD UPON

In one of our previous briefs, we had introduced a pattern into the design work which, had opened up many possibilities for the visual side of the design solution.

Thinking back, a pattern had previously given us a grid system and a framework to build upon, so we employed the same train of thought with this brief, as having a framework, gave us massive scope for the visual solution.

There were the recurring questions we asked of ourselves regarding this brief, how could it prove fun and bring joy to the viewer, how would it relate to contemporary art, how do we transport the viewer to a childâ€™s mindset in order to provoke empathy and remember how they felt as a child. How did they see the world, what were their hopes, what did they want to be when they got older, what did they find fun, did anyone listen to their ideas, were they given the freedom to think for themselves?

We needed to feed and satisfy all of these thoughts into a concept and design which would give us adaptability, longevity and aesthetical appeal throughout the life of Project20/20.

There were also, many things we demanded of our work throughout the design stages and by asking such questions, we were able to narrow our solution and focus.

Whatever we produced would need to make the audience feel something, make them look at the information differently and visually, it must appear different to what they view on a regular basis.

We wanted to provoke questioning and spark imagination and make the audience feel something, just as a piece of art would in Visual Thinking Strategies.

We decided to use a visual of a brain for the initial introduction of the project at the MuseumNext event, because our brain is where all thought begins.

Looking at visuals in the early education area and early learning tools, we came across many images of building blocks, a classic depiction of early education, and something that our research had shown repeatedly.

This sparked off another train of thought with regards to our framework and the visual concept. Children enjoy playing games, which related to the fun aspect we wanted to promote, they are also are exposed to a lot of technology, computer games, online games, apps, etc, and we live in an age where technology is improving constantly. However, when we were younger, games and technology were not as developed as they are now, and in relation, this is how we all start our lives, developing as we grow and absorbing information.

Taking into consideration all of our thoughts and research findings, we developed the gift concept further and produced a gift envelope, with a pattern made of coloured blocks.

The coloured blocks making up the pattern have a few meanings.

They represent early learning, (ABC blocks), early technology (8-bit games), they are brightly coloured as are most childrens toys, and, they also represent the child.

To emphasise the thought part of the concept, we incorporated a pop up of a brain infographic, (which employs the squares and is also reminiscent of early technology, before extensive programming). Therefore, the pop up represents the undeveloped brain of a child, before it has been programmed with knowledge, and uses the pop up to represent childrens books/ childlike aspect, and this pop up reveals itself when we open the envelope.

The pop up gives the gift another dimension and movement, which makes it more engaging and this also relates to the VTS, as an alternative method of education with another dimension to it. Rather than learning through the word alone, children learn visually and explore, both on their own and in a group. By creating interest, the viewer is engaged and intrigued by difference of the piece, looking at it in a different way and curiosity is sparked. Therefore, the features and benefits of the VTS process are resonated in the physical make up of the piece itself.

There is also the aspect of the â€˜prominentâ€™ piece, (the pop up detail), as this relates to the exposure of the process itself, as it is becoming more prominent as time goes on and, showing evidence to support improved academia in relation to the process.

Therefore, we felt the visuals and the concept fitted the brief and the process quite well, as this piece, in its design and aesthetics, can be open to interpretation by the viewer, just as contemporary art can be and the visual material used throughout the VTS process.

There are a great many choices of how the â€˜visual brainâ€™ could potentially be developed in order to represent our thought processes and brain activity in relation to VTS. There could be animations for digital use, installations and sculpture to occupy the gallery space and this concept, could not only be used to represent VTS and skill development, which help in other subjects, but artworks, sculptures and the visual application of this concept could also be used to facilitate teaching other subjects.

The team feel extremely privileged to have been asked to not only work on this project, but to also provide artwork for the MuseumNext event and, write this blog. It has given us great creative freedom, enabled us to experiment massively and given us the chance to use our existing skills and knowledge, as well as developing so much more throughout the research and development stages. Above all else, Brainbox has been one of the most enjoyable experiences we have had and have loved every minute of it, and we wish Project 20/20 great success over the next few years.