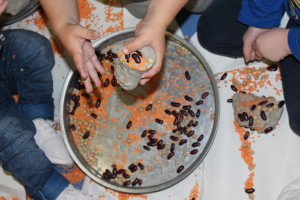 The children of little learners DALC were introduced to â€˜Wild Thingsâ€™ in our setting on June 29th. The children were first introduced to the lovely Seodin, Liz and Natalie, who greeted the children through song and actions. The children were instantly intrigued. There were nine children present ranging in ages from 2 years 3 months to 4 years and 2 months. Our setting, for the occasion was stripped of furniture to ensure no additional stimulus would take away from the session. Due to Irish weather we were unable to meet at the Lab studio so were very grateful the team could join us!

Seodin, staff and the children gathered in three groups on the floor where they were introduced individually to natural materials for play; media included a generous amount of lentils, kidney beans and chick peas. The children were encouraged to touch, feel, and allow the grains sieve through their fingers. Every child and adult participated in this sensory and explorative play. Large sheets of white paper were provided for the children and adults to create together and individually. We made hand imprints, flowers, people, wind, snow, dinners, rainbows and so much more. The childrenâ€™s imaginations were ignited which led to them taking the lead in developing and expanding the play. The children ventured from group to group mixing and playing with all three media.

Seodin then introduced the children to clay, she captured their attention by using exaggerated movements when pulling, and teasing the clay apart. Every child was given a piece of clay. This more robust natural material invited more physical play; the children pulled, rolled, squeezed and manipulated the clay.

The adults stepped back and the children were allowed to play uninterrupted for a period of time with no restrictions, no instructions, just the freedom to play and explore with the natural materials.

One major observation in the introduction to â€˜Wild Thingsâ€™ was the surge of language used during the session. The children were keen to show and tell you what they had made, they discussed shapes, planned their play, and used language associated with mathematics such as â€˜heavy, light, big, small, etcâ€¦ 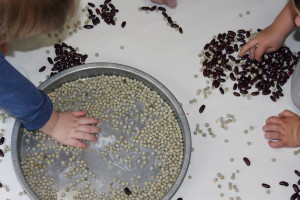 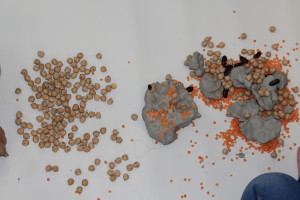 Some children were involved in deep play until asked questions about what they were making:

Halle was observed to be playing quietly by herself using all three media. When asked what she was making she said it was â€œfireâ€. She pointed to the lentils (orangey, red in colour). Rolled pieces of clay were placed carefully on top of her fire which she described as sticks and she talked about how playing with fire was dangerous and her Daddy says she is â€ not to touchâ€ (Photo 1). Jerome Bruner, a child psychologist, talks of play as â€˜memory in actionâ€™ and discusses how â€˜children play in order to remember and think about events and experiences in the livesâ€¦ in order to make sense of themâ€™ (cited in Smidt, 2011:15).

The children participated in dramatic and symbolic play, this promotes abstract thinking. When we saw Leo use rounded clay as a football, and Davin talking on the phone using a large piece of clay they are using symbols. This shows the preliminary stage of learning through symbols, the next stage for some of our children is primary school where the children will use letters, numbers and words as these are real symbols for real objects and quantities.

Sam created his own sculpture where we, being adults, presumed it was a snowman or person. However this was a real lesson for adults not to make presumptions about childrenâ€™s play, just because he made something doesnâ€™t mean it needed to be something. Sam had no name for it, he pointed to specific parts and named them as a window and a door. (Photo 2) Davinâ€™s masterpiece was also â€˜a secretâ€™. (photo 3)

The session ended when the children came together to discuss what we all created with the materials. The children had a fantastic morning, and enjoyed â€˜playingâ€™ with Seodin, Liz and Natalie. We all came together to say goodbye through song again and a promise of playing together again.