Playing with Art and Architecture was primarily based in DCU itself but the first and last sessions were held DCC Arts Office on Foley Street. I was aware that for many of the children that this would be their first experience of a contemporary art gallery. Session One would be a first on many levels. It would be the first time that the 5th class children would meet each other and the first time that I would meet them.

The session started in The LAB Gallery’s larger exhibition space on the ground floor with the focus on a practical activity within the space. Using the large windows as their canvas I gave the children clear directions as to what they were required to do allowing the exhibition to be stumbled across almost accidently. Leaving the exhibition in the background allowed the children to look at the work in their own time. I hoped its content would evoke the children to ask questions or make comments about the work. So Through The Singing Land He Passed, Sabina Mac Mahon was the exhibition installed in the gallery in April and it was both intriguing yet perplexing and I was unsure of how and what the children would make of it.

As the children drew portraits of each other through the glass panes their laughter echoed throughout the space. Not the giggles and sniggers brought about by the classical nude sculptures of museums but roars of laughter fell about. This was the first time I had attempted this particular approach to portraits. We all learnt a little about looking, perspective and drawing but the most successful elements was the laughter. It was at that moment I noticed how the presence of laughter is to set the group at ease allowing the children to take in what they were surrounded by.

As directed by the VTS approach the children were invited to look at the work and they were encouraged to ask questions if they had any. As the children drew they explored the work asking many questions and offering comments. These I responded to on a one-to-one or smaller group basis. One of the children wondered whether one of the pieces of work was finished and whether it was or wasn’t why do galleries only show finished work? She had a point I have been wondering on this question since?

We looked briefly at John Beattie, curated by Sheena Barrett and Donal Maguire the second exhibition in The LAB Gallery. The dynamic of the group was eager and open and here again the children looked and asked many questions. This show used slide projectors of the old fashioned type rather than digital technology. An element of what the children saw was an artistâ€™s use of small sketchbooks to record the artist’s daily observations. It was these two particular elements that we worked with, integrating these ideas onto the portraits we took upstairs with us. They worked quickly and eagerly as I observed their dynamic and listened to their chat until it was time for the children to go back into the rain with new sketchbooks in hand and enthusiasm and intrigue in their minds.

The children’s drawing skills were at a strong level and many were interested in drawing emojis, cartoons and fantasy. My plan was to introduce thinking and building in 3D, using ourselves and the buildings in DCU as our starting point. Based on the strength of questions asked by the children throughout this session I felt confident that the children would be able for and enjoy this task. 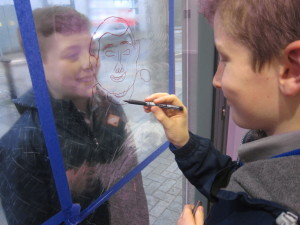 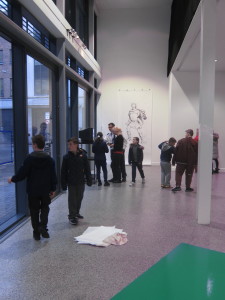 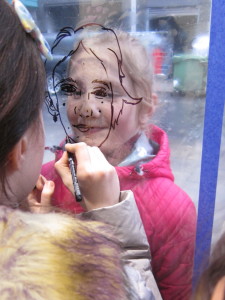 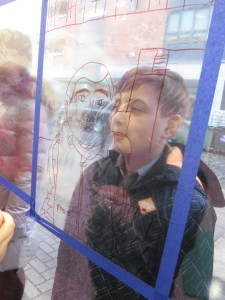 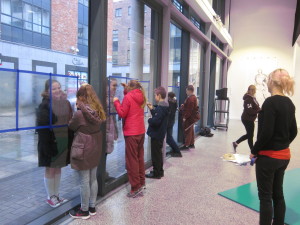 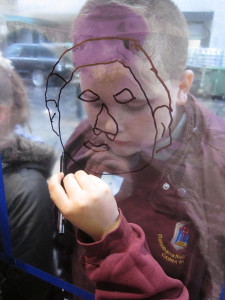 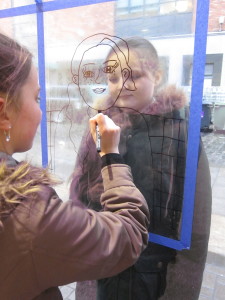 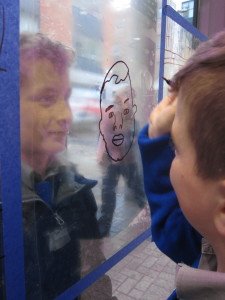 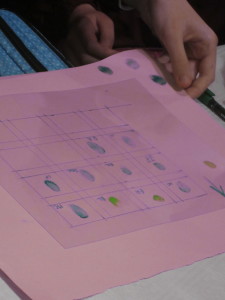 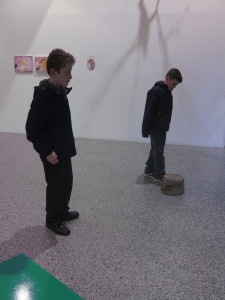 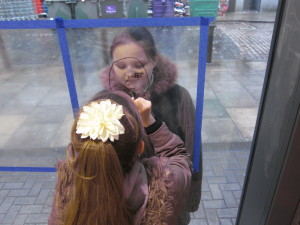 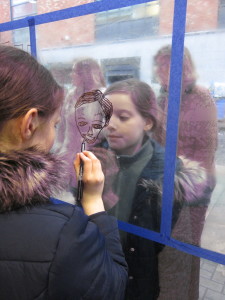