My approach to exploring contemporary art with children is to identify a core experience or feeling that evokes a response from the child. This may take the form of laughter, mischief, the recollection of a story or event, annoyance but essentially what happens is that they identify something specific and unique to them. I believe that their ability to explore and understand a concept is to ensure that it can be connected to an experience of their own. This also transfers to work they will create themselves. Work created by the child based on their own experiences will delve far deeper delivering a much richer experience for the child that is reflected in the quality of the work they produce.

Session Three was all about making a building in 3D in a world of fantasy or fiction that would host a character and that character needed a narrative. The children were familiar with comics and story boarding in 2D but this task asked them to think about how this would work in 3D. I had brought a variety of materials with me of which many were transparent and suitable to write and draw on. Within the structure of their buildings the walls, floors or windows would provide a canvas for developing or depicting the narrative within their buildings. I wanted the children to understand that contemporary art often incorporates lots of different forms from text, to sound, to pages of the artist’s sketchbook to using found objects; there are no limits to what and how something can be used.

I worked one to one with the children discussing their ideas as the sketched. As the ideas formed we looked at the construction and materials. Lots of attention was given to the technical construction of their pieces, I wanted the children to focus on finding solutions for their constructions whilst learning practical skills. I was also aware that the children would need to see the beginning of their ideas realized in 3D before the end of this session. Each piece was completely different from the next and this demanded a lot of extra support that came from Natalie and Roisin. The buildings started with a polystyrene block that is easy to build up from and quickly the structures rose from the white blocks. I was quite astonished at the speed of which some of the children worked both in their ideas and their constructions. As the children worked I discussed the narrative for their characters with them. I noticed that the boys in particular had begun to delve quite deeply into the personality and scenario of their chosen character. I asked the children to develop this aspect for the next session and I took a long list of materials that the children felt they needed for their work for our next session. 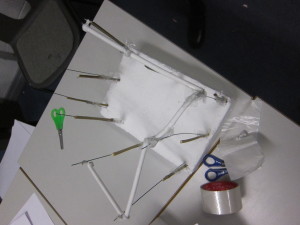 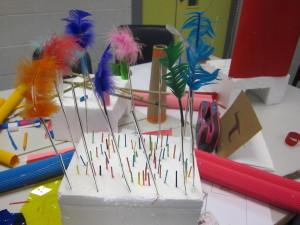 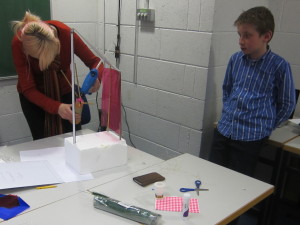 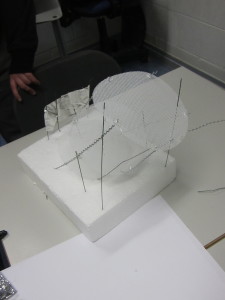 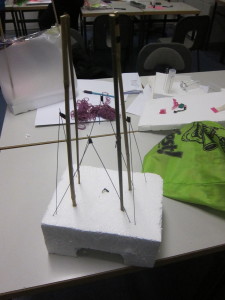 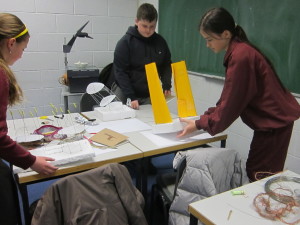 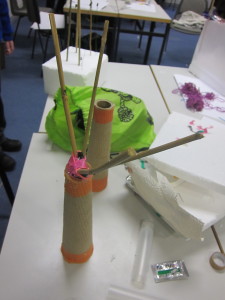 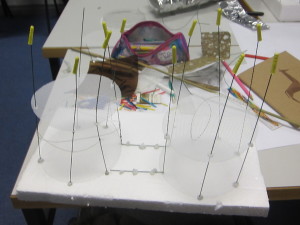 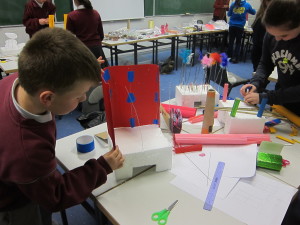